The Right Way to Use Hashtags on Social Media 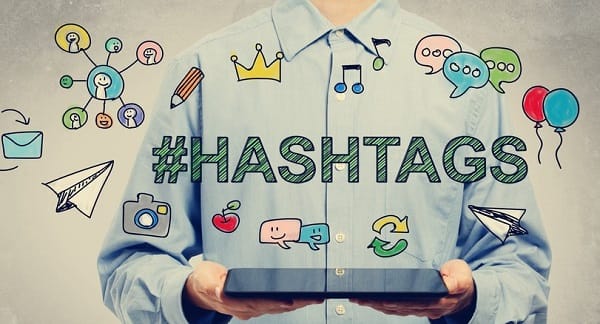 by Build that Blog

Did you know that #TwitterBestFandom is in the Guinness World Records as one of the most-used hashtags within a 24-hour period? It was created as a way to vote at the 14th Annual Soompi Awards; an award show for KPop fans. In just 24 hours, the hashtag was used almost 61 million times.

A few more examples of hashtags that went viral:

Knowing how to use hashtags is crucial for any blogger who wants to increase visibility and build an audience on social media.

The Nature of Hashtags

The word "hashtag" is relatively new and was only added to the Oxford English Dictionary in 2014.

"a word or phrase with the symbol ‘#’ in front of it, used on social media websites and apps so that you can search for all messages with the same subject" (source)

Every hashtag begins with a hash symbol "#," otherwise known as a pound sign, followed by a string of letters. You can't include any other symbols in a hashtag. The same goes for punctuation, such as commas or quotation marks.

However, you can use numbers. You can also use underscores, which help to create hashtags that are easy to read.

Users can search for specific hashtags, follow them, and even use them in their own posts.

Use Memorable and Relevant Hashtags

Instead of a hashtag like #thebesthotdogsinalloforlandoflorida_2021, you can simplify it to #BestOrlandoHotdogs. Something short and easy to spell is a good rule of thumb to follow.

With relevant hashtags, you'll be able to tap into the right audience.

Often a single hashtag is all you need. Using too many can make a social media post look spammy and work against you rather than for you.

For instance, imagine that you're posting to celebrate a holiday, such as Valentine's day. The hashtag #VDay will look clean and sleek and allow you to reach people interested in Valentine's day gifts or events.

It also helps to adopt at least one catchy hashtag that relates to your brand/niche. If, for example, you have a beauty blog, you could make a habit of using #LookAmazing, or something similar.

When you keep hashtags to a minimum, the important ones will stand out, be more memorable to your audience, and have a greater impact. And, some social media platforms will block posts that contain too many hashtags.

With TikTok and LinkedIn, keep it to less than five for each post.

If you want to choose the best hashtags, you need to stay in the loop about what's popular.

Some hashtags have lifespans that are shorter than mayflies, while others will always be popular. However, even a briefly-lived hashtag can get you a ton of valuable exposure.

Trendy hashtags for Twitter or other social media sites are often associated with news-related events. Not every trending hashtag will be suitable for your posts, which is why you should always have your feelers out.

And, you can get creative with popular hashtags. For instance, NYRB published a two-volume novel by the German writer Uwe Johnson. When the Johnson and Johnson vaccine was released, NYRB published a Tweet on Twitter, along with a relevant hashtag, asking readers if they had gotten their double dose of Johnson yet.

Overall, it's best to have a balance between popular hashtags invented by someone else and custom hashtags that you've created for your brand and your posts.

Aside from being aware of what's going on across social media sites, you should also pay attention to any holidays that are coming up. There are obvious ones like Christmas and St. Patrick's Day. Still, you could get a lot out of more eccentric or unusual holidays like Opposite Day or National Ice Cream Day!

There are some useful free sites that will generate a ton of hashtags for you based on the keywords you enter.

Bigbangram is an Instagram hashtag generator, but you can use it for any social media site.

Metahashtags is another one for Instagram, but as above, it can be used anywhere.

Using hashtags effectively on social media will help your content to reach as wide an audience as possible and help you to build up your social media following. Ultimately this means more targeted traffic to your blog, which also means more revenue!

Theo McArthur has been blogging for more than 20 years and has extensive experience with WordPress, content marketing, and affiliate marketing. In 2016 she launched the video training course, 'Blogging for a Living', and has taught over 22,000 students how to set up their own successful blog

Get the Step-by-Step Video Training Course and Start Your New Blog Today :)

Please log in again. The login page will open in a new tab. After logging in you can close it and return to this page.

This website uses cookies so that we can provide you with the best user experience possible. Cookie information is stored in your browser and performs functions such as recognising you when you return to our website and helping our team to understand which sections of the website you find most interesting and useful.

Strictly Necessary Cookie should be enabled at all times so that we can save your preferences for cookie settings.

If you disable this cookie, we will not be able to save your preferences. This means that every time you visit this website you will need to enable or disable cookies again.

This website uses Google Analytics to collect anonymous information such as the number of visitors to the site, and the most popular pages.

Please enable Strictly Necessary Cookies first so that we can save your preferences!